Welcome to our Heritage

The 125 year old 'chengara Tharavadu' at Angadipuram is one of the ancestral homes in Angadipuram. Puthanveedu family is one of the primeval families, from the district Malappuram,Kerala state situated in the south coast of Arabian Sea.
It truly becomes a favorite destination of tourists who want to experience the life style of Kerala in an ethnic surroundings. The culture and Heritage of present Kerala is derived from the ruling scripts of several tiny kingdoms and contributions of diminutive families and religion. The Puthanveedu family represents an enormous part of the heritage hegemony and socio-cultural harmony of the past and present Kerala. 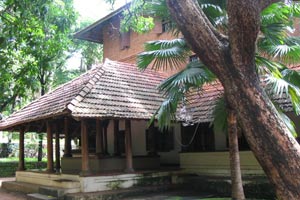 The "Tharavadu" of Chengara Puthan veedu family was built by Sri.Kesava Tharakan, a land lord of "Valluvanad" in that period.Now the descendants are at many places and presently the property is owned by Sri.P. Narayanan, Managing Partner,(SPARC Group).The "Tharavadu" has not undergone too many changes over 4 generations and it is in a picturesque location with green surroundings and quiet ambience. The premises area always cools even at the hottest days of the year. 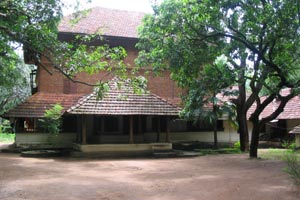 The "Tharavadu" which is an 'ettukettu' (with a twin elevation plan and a nadumattam) is built in accordance with the traditional kerala architecture. The doors are also decorated with brass cladding and the rooms are well ventilated. All these add the beauty to the Mansion-house. The mansion has three floors built with laterate stones and outside is not plastered with cornice works.

One of the striking features of the house is the front elevation, raised 'Purathalam' (sit out) with grand heavily worked Jack Pillars. Traditionally, as in most 'tharavadu', the house is divided in to two for men and women. The men's area is around the 'purathalam' and the women's area is towards the rear of the house with an additional 'purathalam'. There is a family 'Kulam' (pond) with two 'Kadavu' (Entry). One for men and other for women.

Angadipuram is famous for its two temples, the Thirumanthamkunnu Goddess Bhagavathi Temple and the Tail Lord Shiva Temple. The Puthanangadi Mosque has Arabic inscriptions engraved on one of its planks.

Thirumandamkunnu Temple is a historically significant Hindu temple at Angadipuram near Perinthalmanna which is known as the capital city of Valluvanad, in Malappuram district. Angadipuram Thirumandhamkunnu Bhagavathy temple, standing on a 60-ft high hillock has an imposing appearance. 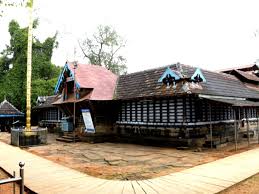 Home | About us | Our facilities